The current drought has been hitting the entire Caribbean pretty hard. Most of the statistics and facts can be found by reading the news articles coming out almost daily. However, if you have not been following the headlines as religiously as we have, here is a quick recap:

Up to date information

As previously mentioned the two worst affected reservoirs are Carraízo and La Plata. Together these reservoirs provide the majority of the water to the San Juan metropolitan area. Where we live in Carolina is served by the Carraízo reservoir.

Here are the current water surface levels of the drought affected reservoirs (meters): 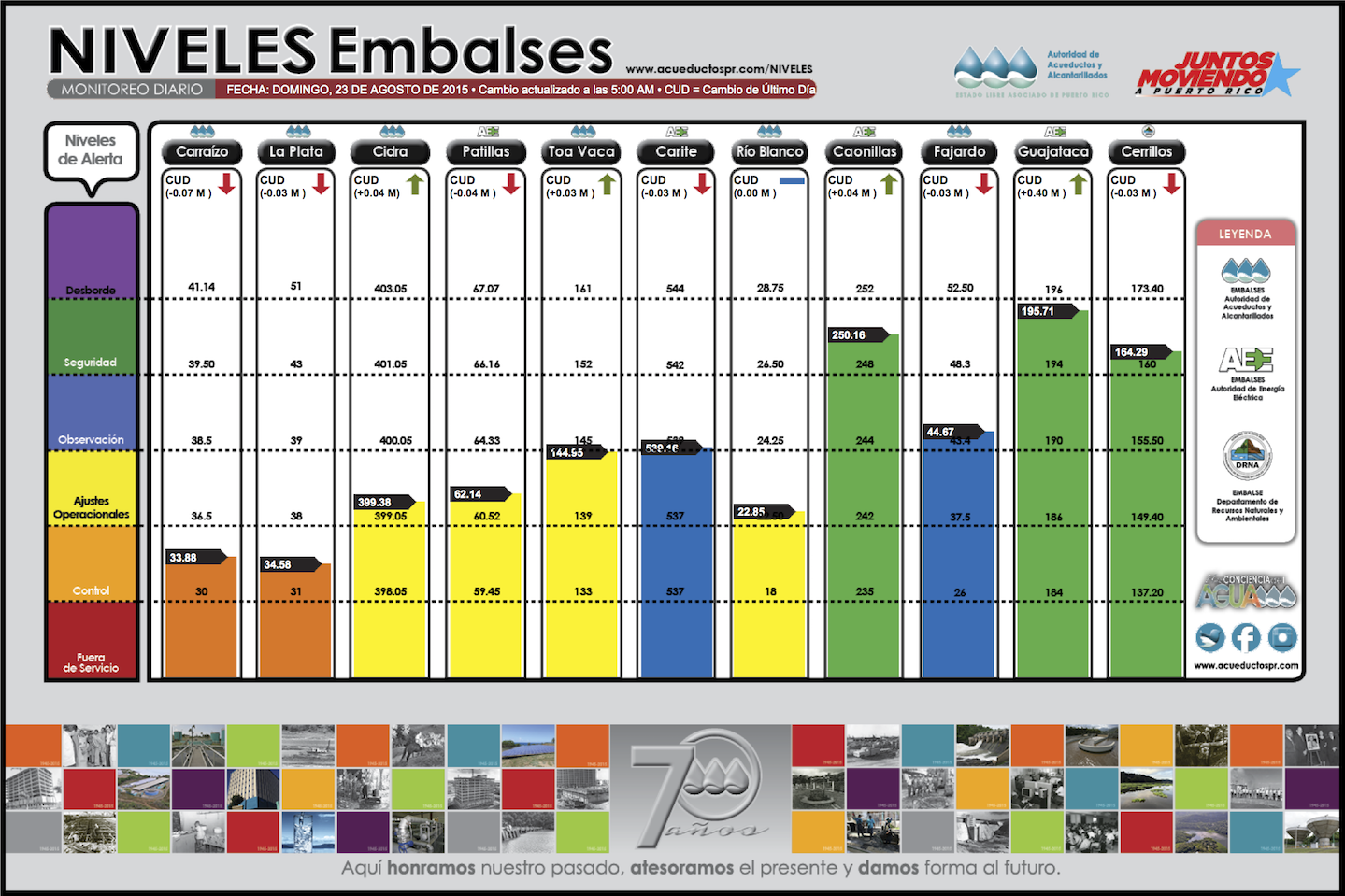 Here are the surface water levels of the Carraízo reservoir for the last 14 days (meters): 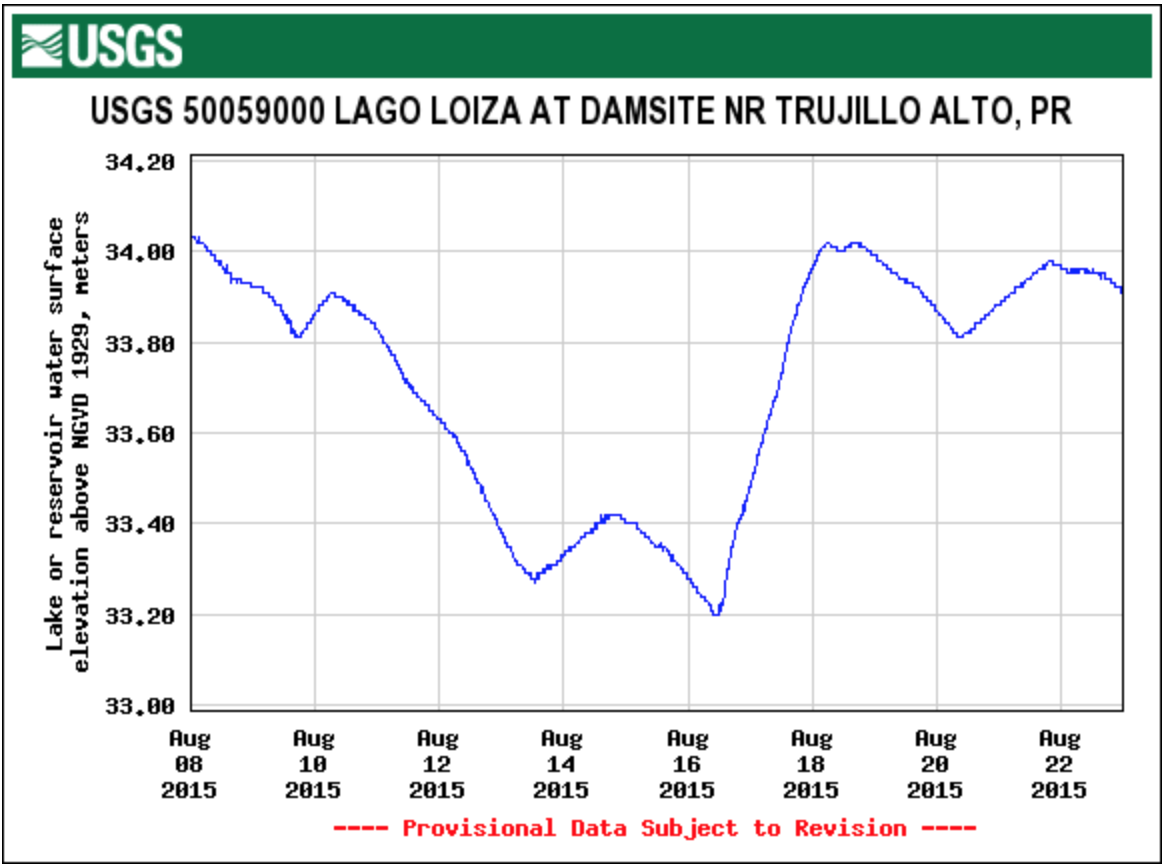 And here are the surface water levels of the Carraízo reservoir since the beginning of the year (feet): 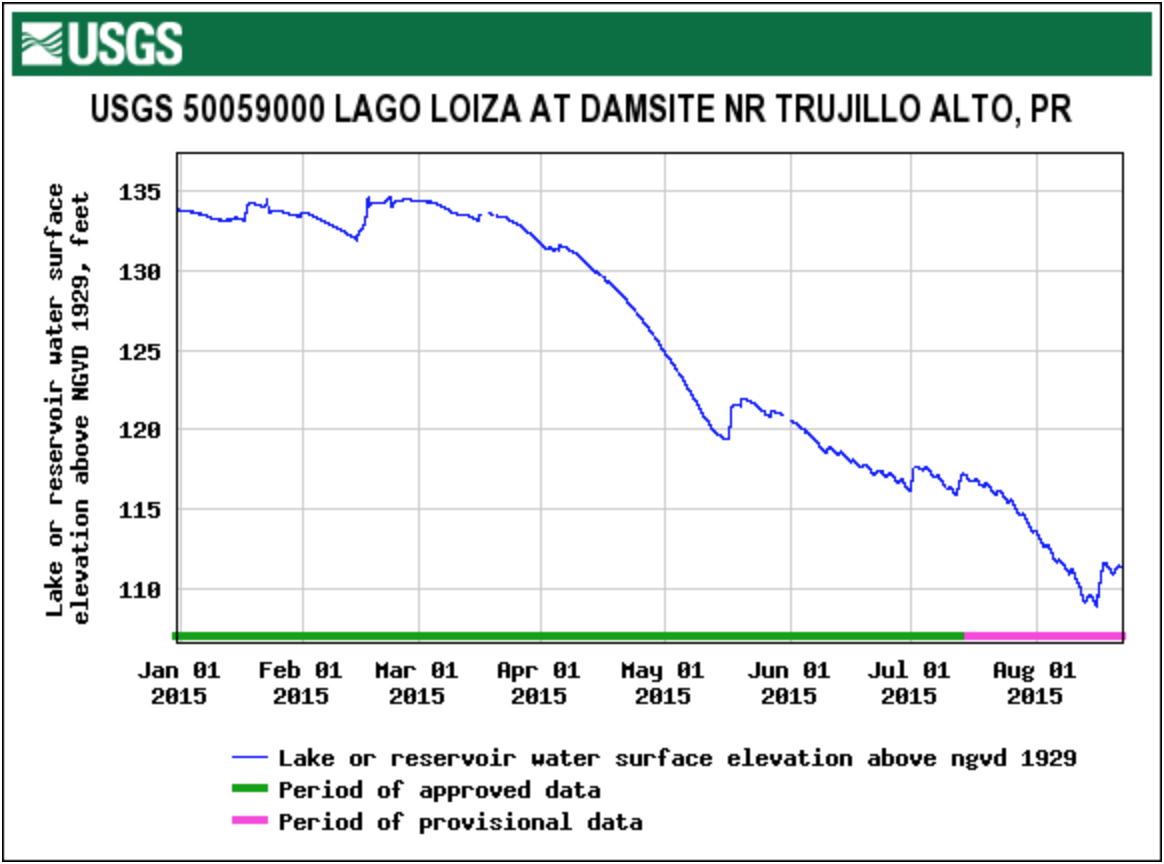 Not pretty pictures. However it is not quite Mad Max over here just yet.

Everyone is surviving in their own way. When the water is on most homes fill jugs, bottles, buckets, and the now ubiquitous plastic blue cisterns. In poorer communities municipal potable water trucks are a regular site. Condominiums catering to the wealthier have giant cisterns providing uninterrupted water; though even these have had to start rationing in the stricter areas. 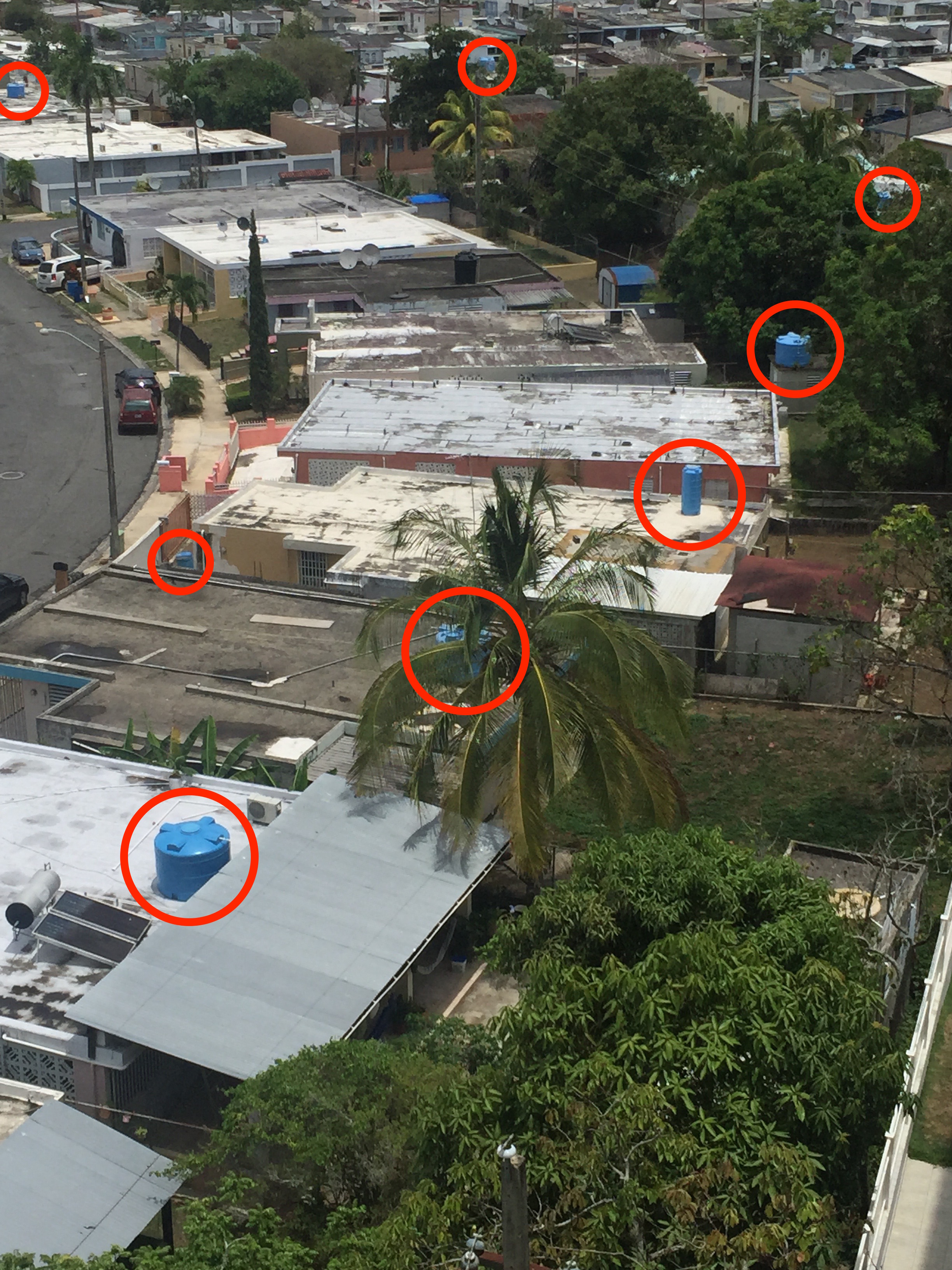 The tourist areas of Old San Juan and Isla Verde have not had their water supply rationed yet. Given Puerto Rico's dependence on tourism this is not surprising. However with all the areas surrounding them on strict rationing combined with some grumbling in the streets it is unclear how long this policy will continue.

The rest of the island 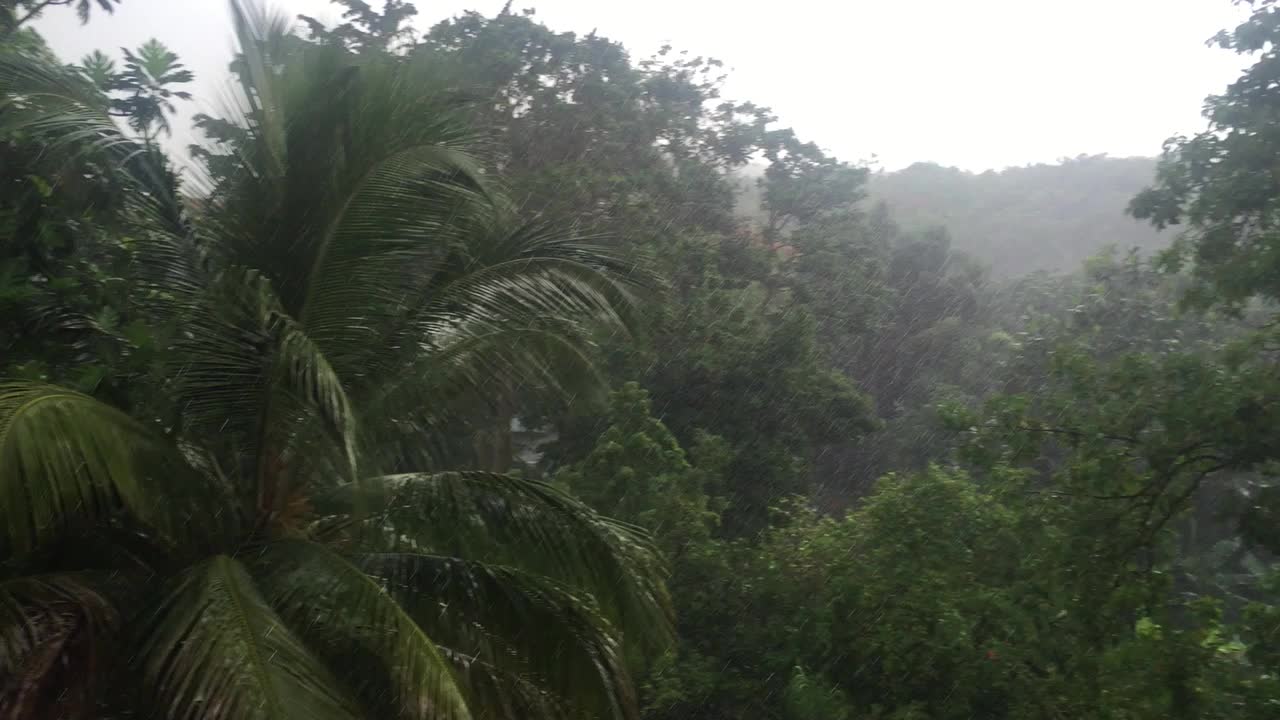 We have been to Rincon on the western extreme of the island twice since we moved out here. It rained every day we were there, usually a ground drenching rain storm lasting from 30 - 60 minutes.

What we are doing

We live in one the strictest water rationed areas, Carolina. Our municipal taps are turned on once every 4 days. We are fortunate to live in a condo complex that provides cistern water mornings from 5am - 8am and evenings from 7pm - 10pm when the municipal taps are off. 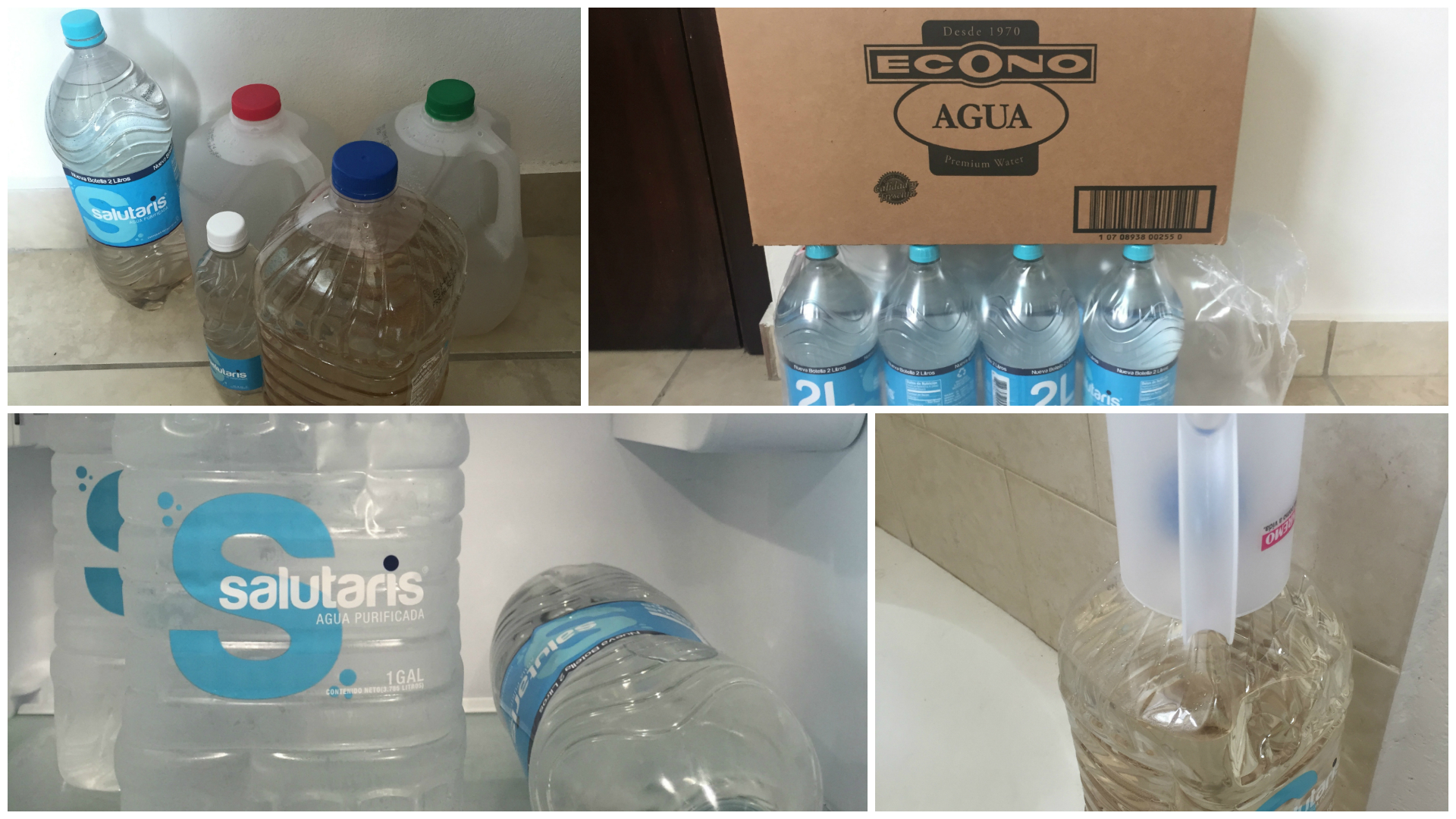 We have replaced all of the toilet flush mechanisms in the condo with dual flush and low water usage capabilities. We have replaced the shower heads in the bathrooms with low flow heads. We also have a small collection of potable and non-potable water jugs we refill as needed.

Next on the list is to replace the faucets with low flow fixtures.

When will the drought break?

We are already half way into the hurricane season without a major storm having hit the island. This is likely the result of El Niño in the Pacific causing an abbreviated hurricane season in the Atlantic. However at the time of writing the first major tropical storm is bearing down on the Antilles. 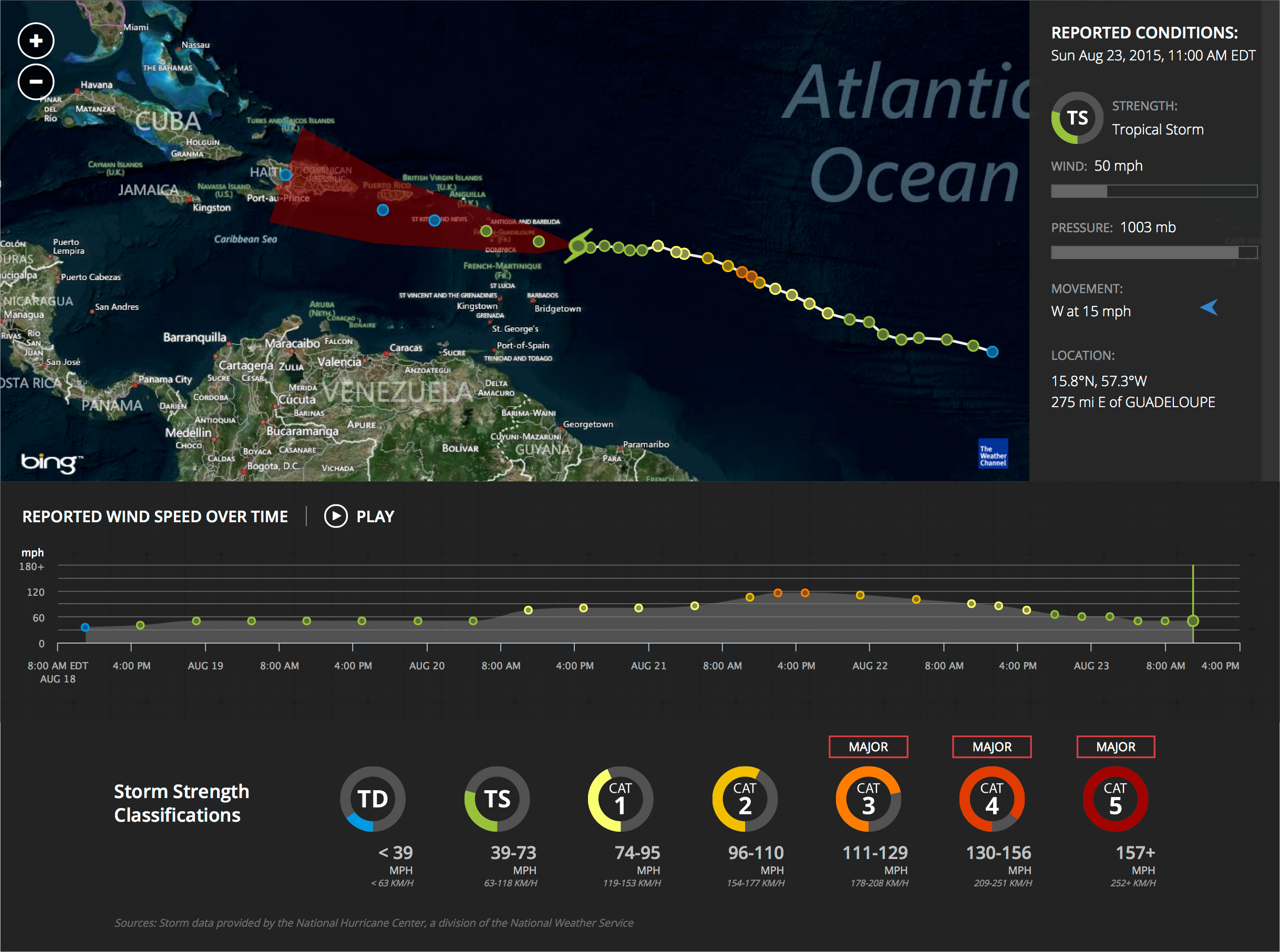 Danny has been reduced from a Cat3 hurricane peak on Aug. 21 back down to a tropical storm. Most forecasts have it hitting Puerto Rico on Monday evening, Aug. 24. When it reaches us it will have wind speeds of around 35 MPH and will drop around 3 inches of rain. Because of its trajectory most of that water will probably fall in the Caribbean off the southern coast of the island.

Hopefully we will get a few more storms before the wet season ends in November. The federal government is also considering some plans to help alleviate the situation. In the meantime if you have any suggestions on how to conserve water let us know in the comments.