*(To catch everyone up, I’ve split this into 2 posts…)

We are officially residents of Puerto Rico! After a nice week long stay with family in Southern California we left on July 10 and stepped into sunshine and humidity midday on July 11th.

Our adventures began at LAX and it went pretty smoothly. My mom suggested using the SkyCab Curbside Check-in for all our bags. I was only worried about the action packer making it through as its lid had to be zipped tied on since one of the handles doesn’t work any longer. It’s great advertising for Rubbermaid as that little box has been with me since college and holds a lot! Here’s the note I left for TSA 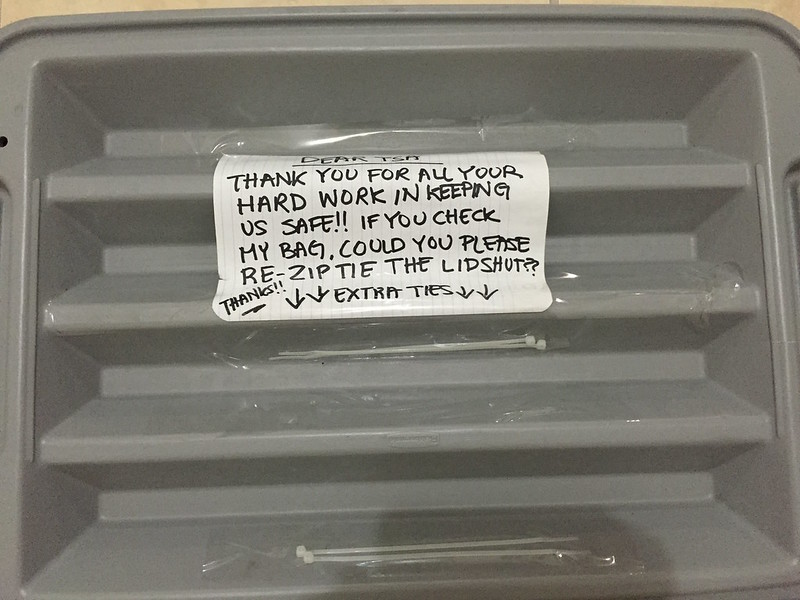 We were both allowed 2 checked bags up to 70lbs for free and we budgeted ourselves a third (50lb) each at $150 a piece. We looked into what shipping a 50lb box would be and it was $300 through UPS so checking was more economical. With all that accounted for we only ended up with 5 checked bags total, not 6 saving ourselves a little dinero! 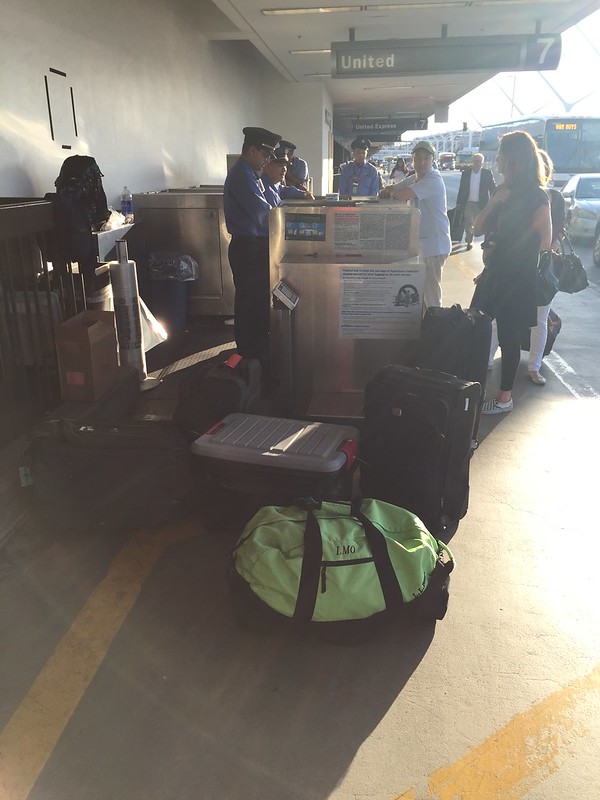 I anticipated the process going a little less smoothly than it did so we ended up with a lot of time at the airport before our flight left - that was fine, people watching at the airport is wonderful.

Our layover was in Cleveland and honestly I can’t even recall being there. We landed about: 6:30am and our flight to San Juan left at 8:15am so not a lot of time on the ground. Once in the air I woke up with enough time to snap some airplane photos as we were landing in San Juan. 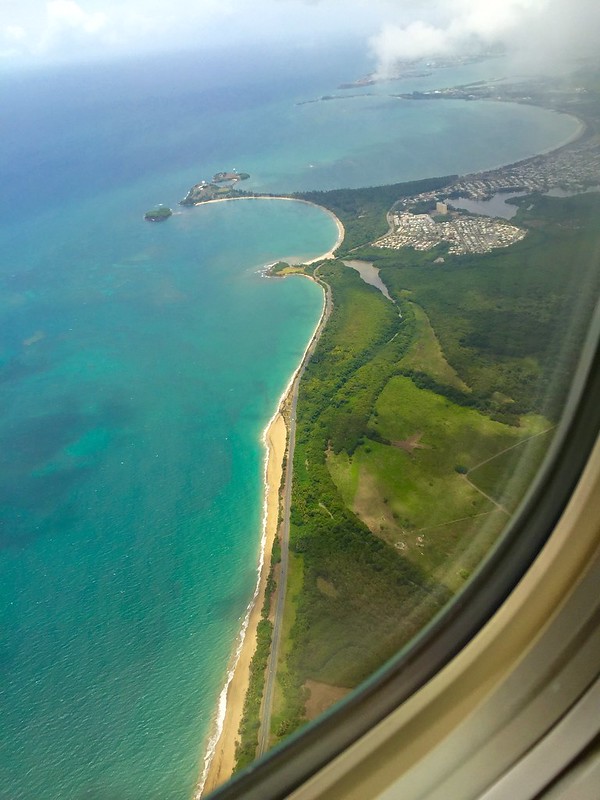 Baggage claim was a breeze and all our bags made it! No breaking or spills to report. One item of note for future multiple-baggage travelers, the airport doesn’t have the luggage carts you can rent for a few dollars but what they do have is even better. There are guys walking around with carts that will load up your items and take them where you need to go. They are also really helpful at navigating you in the proper direction of the rental car agencies which, unless you go with an obscure agency, are just across the street from baggage claim. Our luggage handler took us to Hertz, waited while we got the rental information and keys, then walked us to the car and loaded the trunk for us! It was fantastic and only costs as much as a tip! 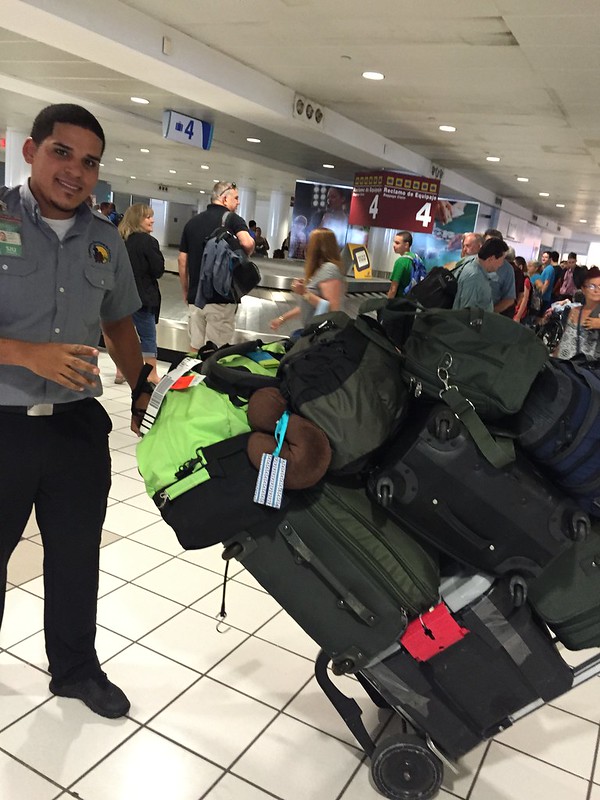 Airline points are great if you have them. From all the traveling we’ve done for work we have a lot of United points and have been able to save some money by using them instead. I know everyone has their preferred airline or would rather go the budget route when flying, but I’m glad I was able to always fly United for work so I could rack up points. In New York, half our kitchen was bought using only points! Like quality kitchen items that will last over the years! Ok, digression aside, one of our priorities once we were on the ground was finding a car, so we rented a car (using points) for a week, with another week’s worth of points stored up just in case we need it…we might…more later on that.

Once we landed Saturday and loaded the car we headed off to the condo in Carolina where we are staying. The complex is at the top of a hill in Carolina with great views and a constant breeze to keep us from melting. Once we checked in with the guard and picked up our keys, we unloaded the car. As tempting as a bed was we realized we hadn’t eaten much all day so headed back down the hill to try Pollo Tropical. If it sounds fancy to you, don’t get your hopes up. Its pretty much Puerto Rican KFC…it was close to the apartment and we were tired hungry and just wanted bed. I think we got chicken and yucca fries. It was a good way for me to find out it should only be consumed in times of desperation. After our feast we were pretty much down the for the count the rest of Saturday.

Jet-lag took us through to the wee early hours of Sunday and at about 7am we decided to see if anything around us was open. Maybe we could get some grocery shopping done? Nope! Nothing opens here until 11am on Sunday! I guess we’re supposed to add church to the Sunday agenda if we want to get up early and have something to do…or we could just go to the beach Sunday mornings. We figured there might be something open in Old San Juan since tourists tend to get up earlier than locals and we knew we’d had an early breakfast at a cafe there last time we were here. Driving into Old San Juan early on a Sunday morning is the best way to see it. No traffic to get there, no tourists all over the streets, it was sleepy and rainy and incredibly beautiful. Once we get the car sorted out I’ll be doing some day trips there alone since Alejandro has spent a lot more time there. The public transportation from our condo to Old San Juan is really non-existent otherwise I’d be using that. 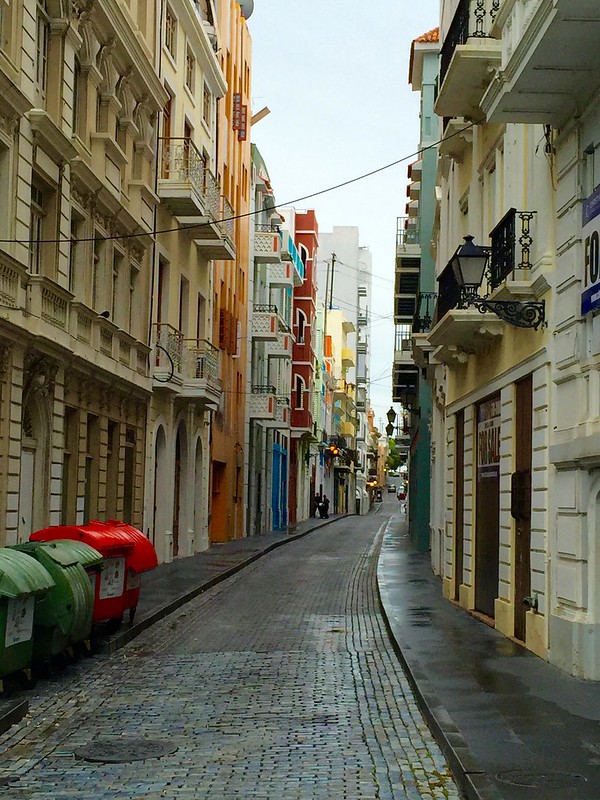 We ended up at the same cafe we had breakfast in on our last trip. I was surprised more wasn’t open but happy we found our cafe, Caficultura, the only other eatery we found open was Starbucks. Its actually known for its coffee and its food is quite good. If you’re looking for a nice cup of coffee with which to sit and watch the plaza check out Caficultura next time you’re in Old San Juan.

We headed back to Carolina after breakfast and killed time until 11am when we could go to Home Depot and Econo, the grocery store. Sunday in the suburbs! Since we’re in the metropolitan area things are pretty well stocked here, I've read differently about the stores out in the countryside. Home depot looks just like any other I’ve been in and Econo reminds me of Safeway. I will miss my beloved Andronico's but I don’t plan on buying a lot from Econo. We’ll see what the farmer’s market has to offer this weekend. I was definitely the only person at Econo with my own bags and for the items that didn’t fit in the bags I brought each item got its own bag. I didn't realize it until everything was going into the car. When we went back last night I was ready though and started bagging my own stuff so they didn’t feel they had to use the plastic bags. There is always a little culture shock when I leave the California environmental bubble. The same thing happened when I moved to Virginia.

Sunday night we decided to go for a drive and check out the famous Kioskos de Luquillo for dinner. Solo post on this to come, but I highly recommend them to anyone who likes bar hopping, snacking, and the beach.

There will be a part 2 to this post shortly but I didn’t want to put everyone to sleep with our exciting day to day dealings, but I suppose that's what this blog is for. Anyway, just wanted everyone to know we made it safely! More to come!