Summer in Rincón is coming to an end. I even had a fleeting thought last night of finding my sweatshirt I packed three months ago…just a thought. It’s definitely getting cooler at night, which means fall and winter are coming and with that the high season for tourists. It’s nice seeing all the changes going on around town as people spruce up shops, restaurants re-open from summer hiatus, and festive lights go up in the town square.

Change in season means not as much rain as well, so without a summer shower every afternoon we’ve been able to get out to the jungle twice a day to get some good clearing in. We’ve managed to clear about 3000 sqft of our 87,000 sqft…about 3.5%… 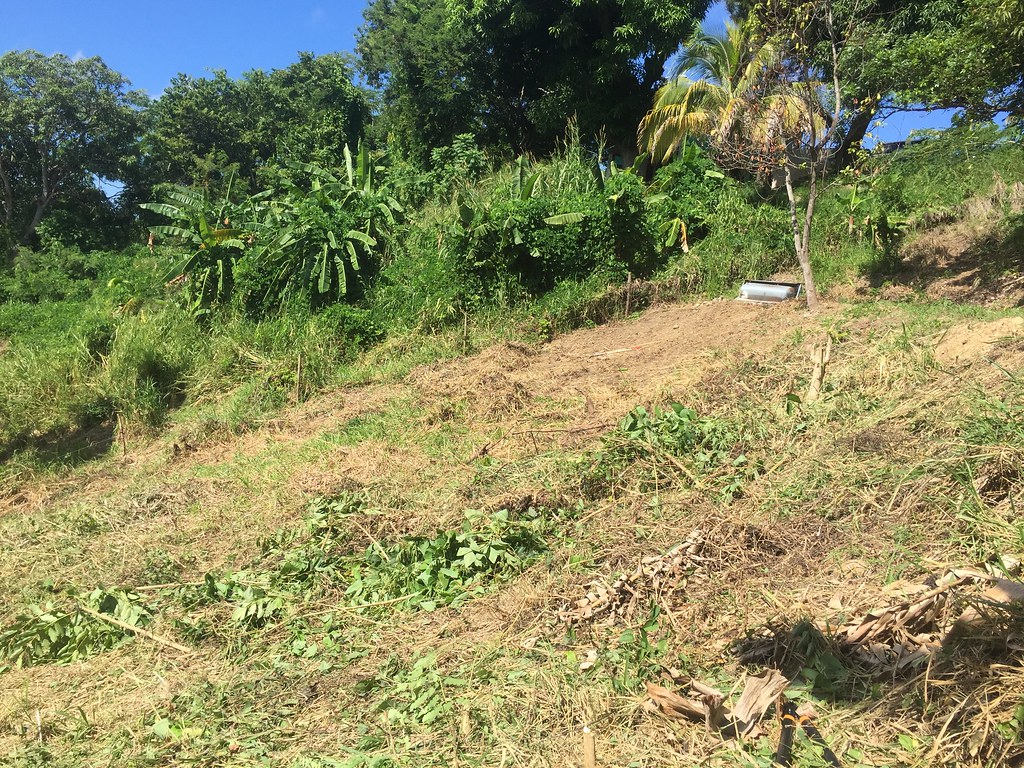 With all the hard work we’ve been putting in we decided to take this Sunday off and go for an adventure. What a lovely adventure it was.

We’ve been wanting to check out La Parguera in Lajas since we moved here but it’s quite a long drive from Carolina. So now that we’re in Rincon, its just a little over an hour away and definitely worth it! We drove out with some friends Sunday morning to La Parguera and pretty much as soon as we got the car unloaded a woman told us she could get us to Isla Mata La Gata for $10/per person. The boat would take us out to the isla, drop us off and come back at our pre-determined pick up time. There was cell reception on the isla, so if we wanted to come back earlier we just had to call. The price was reasonable and it was all really easy.

La Parguera in itself is a nice looking boardwalk area with restaurants, shops, and various boating ventures. You can rent a little panga boat for the day if you want, or do a kayak tour around the cayos off the shore, or just rent your own kayaks to paddle around. I read that the ocean crossing in the kayaks is about 30 minutes and can be tough if the winds pick up. None of us had been kayaking in a while so a ride out to our snorkel spot seemed like the best idea. I would like to go back and do a kayak tour at some point, but honestly I’d be happy with just snorkeling any day. There are also tours for the biobay here but from everything I’ve read the bioluminescence isn’t the best.

The boat ride out to Isla Mata La Gata is about 10 minutes and you pass lots of other little mangrove cays along the way. Mata La Gata, is part of the Parguera Nature Reserve that covers over 12,000 acres of coastal mangrove system. What makes Mata La Gata so convenient is that it has a small boat dock for easy drop offs and pick ups. The dock was built so that it encloses a part of the ocean for swimming, making a natural pool. They’ve hung fencing below the dock to keep out jellies and larger animals. Probably a good little pool to swim in for kids or people not entirely comfortable with open ocean swimming. The island has picnic tables, restrooms, bbq’s, a short walking path through the mangroves, and a very small beach. There were maybe 6 other people on the whole island so we practically had the place to ourselves. 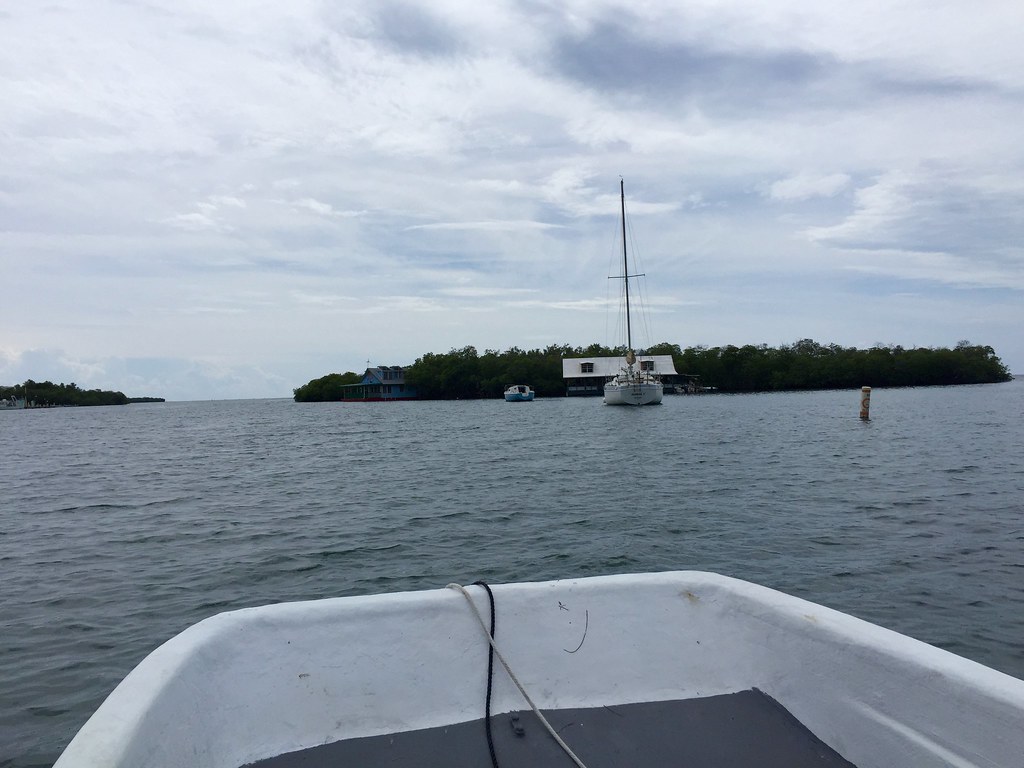 The north side of the island is the calmer bay side, while the south side has some swell but lots of coral reef. We decided to check out the south side of the island first. Getting in took some doing as the entry is pretty shallow for a ways out and there is a lot of dead coral with happy baby urchins all over. Once past this though, the reef opens up to huge brain coral, huge elk horn coral, big gorgonians, interesting looking tunicates and a good number of fish. We were careful not to touch anything as there was a good amount of fire coral around as well. The reef looked pretty healthy, which is a nice sign to see. Animal-wise we saw great big grey angelfish, a few barracuda, lots of butterflyfish, parrot fish, wrasses, a couple squirrelfish lurking in the cracks, lots of blue tang, some sea cucumbers, and much more than I can remember.

We took a break to eat some lunch and check out the mangroves. There were lots of crabs in the mangrove and good number of baby fishes. This island isn’t very big, 1500 ft by 1200 ft so exploring didn’t take us very long.

For snorkel number two we decided to try and snorkel off the north side of the island where the boat dock is as it seemed like an easier entry and exit. Unfortunately most of this area is seagrass and getting pretty shallow near the mangroves so we ultimately ended up swimming/wading back around to the south side. The water was a little rougher as the afternoon got on and soon we realized we were snorkeling in white caps…we decided to call it a day and head back in. We made our way back to dead coral/urchin alley and got out just as the wind started kicking up. An afternoon storm was brewing. Since there wasn’t going to be anymore snorkeling we decided to call the boat and have them come get us an hour before we were planning on leaving. We packed up and 10 minutes later our captain came to pick us up! We noticed while waiting on the dock how calm the bay side of the island was but the south side was starting to get battered. We drove home in a pretty good aguacero for most of the way so we knew it was a good thing we left a little early. There are all these little floating houses around the bay that look so nice, it would be nice to live in one of those but I can only imaging when a big storm or hurricane rolls through there can’t be much protection from the elements. 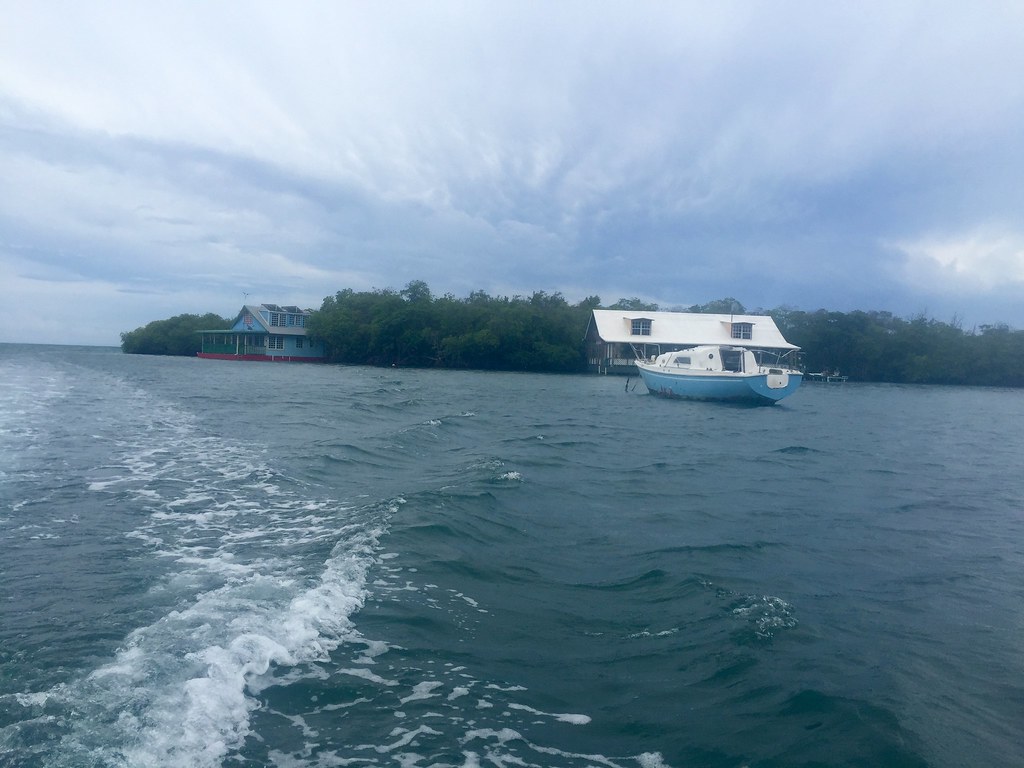 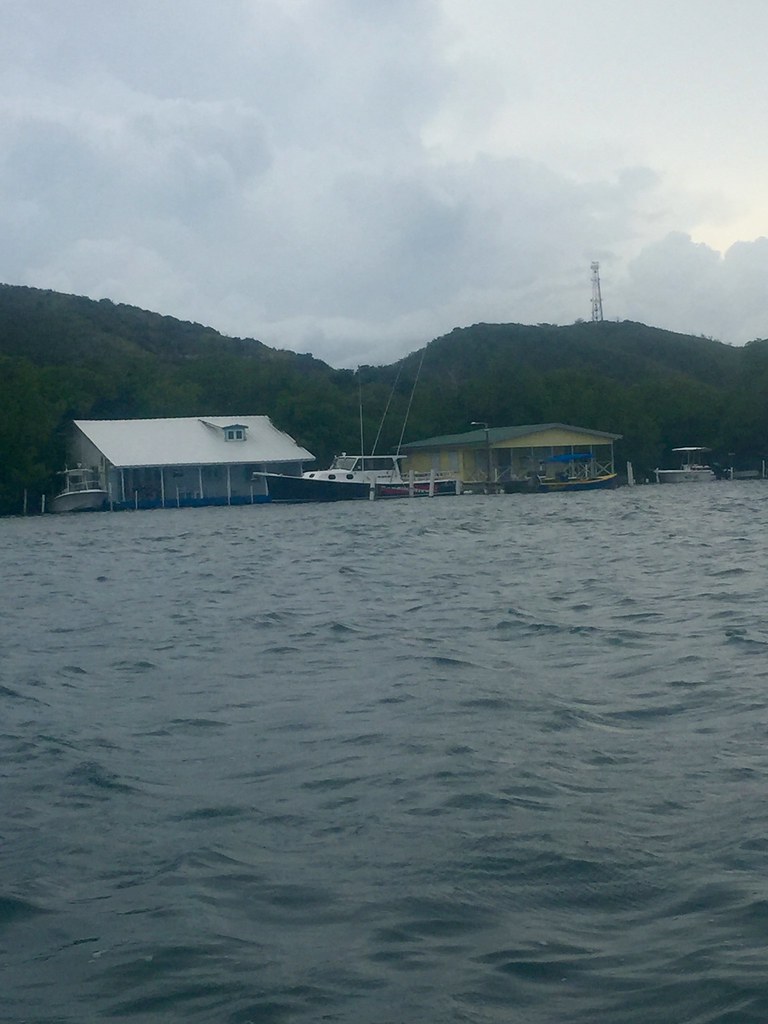 All in all it was a great day! It was super easy and an affordable way to get to a good snorkel spot close to the mainland. I just wish I still had my underwater camera. Our friend did have his GoPro so once that get’s uploaded I’ll share some stills from that here.

We are constantly reminded of just how lucky we are to be here and I’m glad we took the day off from jungle clearing to get in the water and remind ourselves yet again just how fortunate we are.