We've been in Europe 2 weeks now and despite a ridiculous amount of luggage we're enjoying our time so far (as was to be expected). 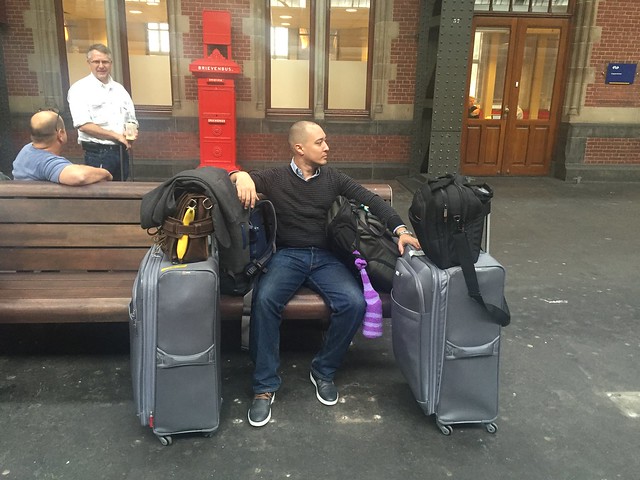 Week 1 was spent in Amsterdam. I worked an event and Alejandro worked in the hotel.

The most surprising thing for both of us was thinking we'd somehow landed back in Puerto Rico as our week in Amsterdam was one of the hottest on record - a couple days reached 90F. I even had to dig out my shorts from the bottom of my suitcase. Sweater weather it was not. Instead what I got were mosquitoes that found me all the way across the atlantic. Good thing I had my back up bug spray and my hand fan packed (never leave home without them...)

Amsterdam is on the top of the list for both of us as far as European cities go. The people are always nice, the views are always wonderful, and the aromas in the air are always lovely (read: waffles and weed). While I didn't have any space cakes this time around, we did take an official and educational tour of the Red Light District run by the Prostitution Information Center of Amsterdam.

We also experienced, on a small level, what living in one of those quaint Dutch houses means. It means tiny, tiny stairs and really high mirrors and peepholes. We stayed at an Airbnb our first night, and luckily one of our companions had the idea to drop our extra bags at the hotel and only taking an overnight bag to the Airbnb. Our flat was on the third floor and the stairs were so steep and tiny I could only fit half my foot on a step. The photo doesn't do the steepness justice, but did you see the luggage in the first photo?? Thankfully we didn't have to haul all of that up these stairs... 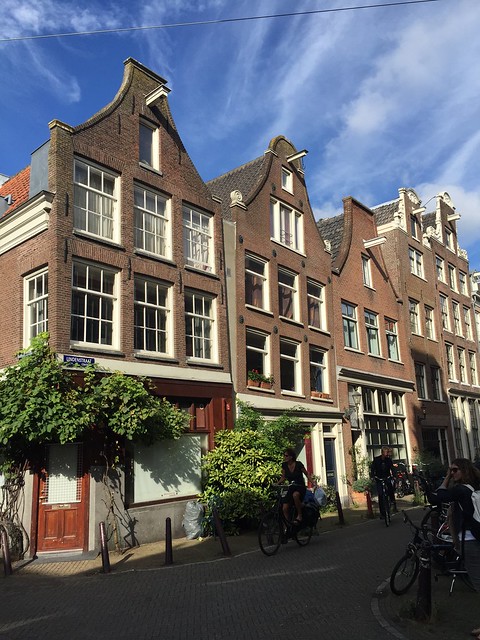 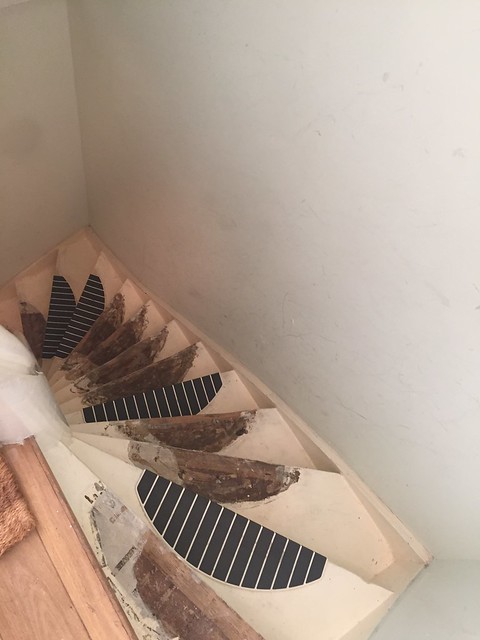 All in all Amsterdam was a good week. We met and saw a lot of fun people, learned more about Amsterdam, ate good food, and laughed a lot. The only mishap was a lost Goorin hat somewhere at the train station.

This car is the epitome of Dutch for me (tall and skinny)... 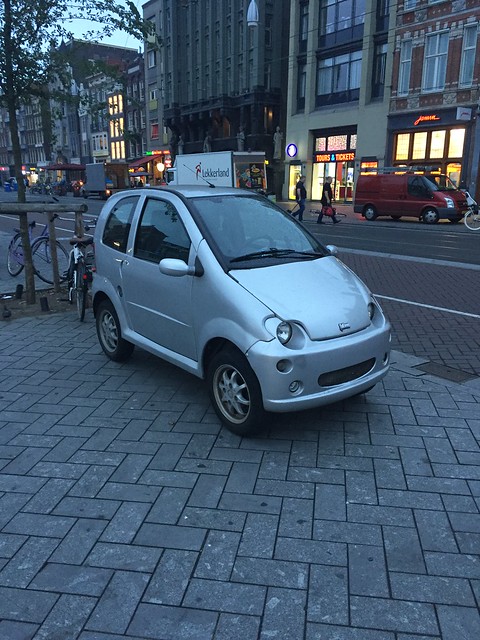 It's never a trip to Amsterdam without a Wynand Fokink 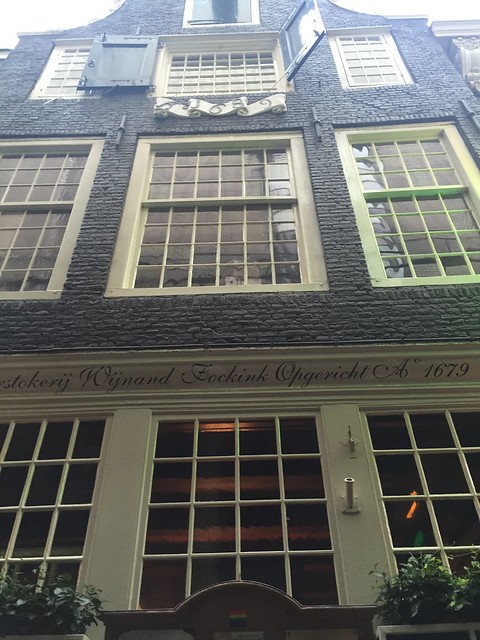 Week 2 was Cologne. This definitely would not have been a city either of us would have had on our list, but since I have to be in Frankfurt next week, it was a halfway point and something new to explore. We haven't been disappointed.

To be honest, we picked this city because we saw Anthony Bourdain visit in on Parts Unknown. This is a beer city. Not a craft beer city, a kolsch beer city. That was really the selling point for Alejandro. 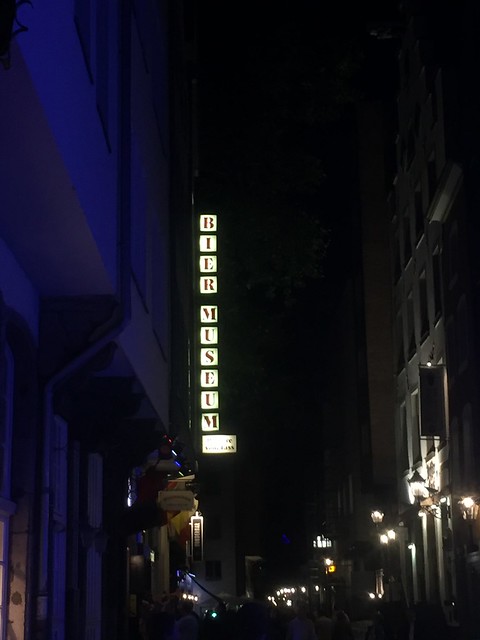 If you read travel guides about Cologne, you'll read that locals consider it an ugly city, but we both agree it's anything but. While it's not nearly as international as Berlin, and without a huge tourism draw like Munich, or as wealthy as Hamburg, Cologne feels very German and yet very cosmopolitan. 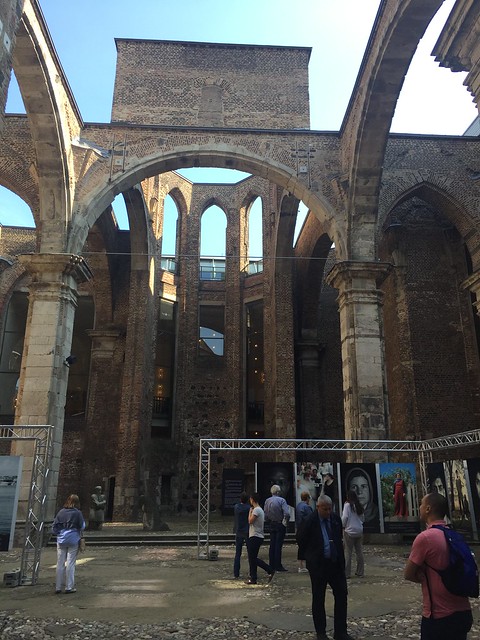 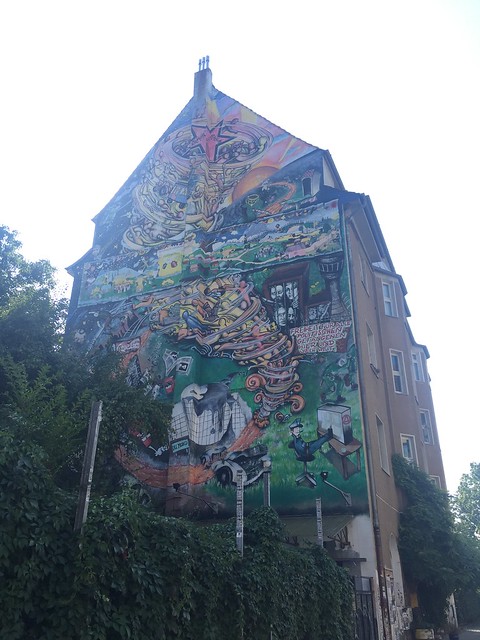 It's by no means a large city, and a good portion can be explored with a few nights worth of dinners and a weekend of walking. There are people of all different cultures here, and everyone is very friendly and relaxed. It is the first place in Germany we've travelled where the majority of people we've encountered don't speak English. We've picked up a few words and rely on our translate app, but everyone has been very kind and patient with these linguistically challenged Americans.

The draw for us to come here was for the Kolsch beer as I mentioned earlier. Kolsch is like champagne in that it can only be made here in Cologne. Here the brauhaus (brewhouse) is in every neighborhood each making their own version of Kolsch (and perhaps another beer or two) served along side a heaping meal of traditional german food. To me, Kolsch tastes like an every beer, but I'm not a beer drinker so I'm biased. The fun part about the brauhaus experience is the beer drinking is similar to the experience of a Brazilian steakhouse. Once you finish your tiny glass (0.2L) of Kolsch they bring another one and make a mark on your coaster. To get them to stop you place a coaster on top of your glass. Of course you can get kolsch at regular restaurants but the brauhaus waiters with their 20-glass beer-slinging trays are enjoyable to watch. 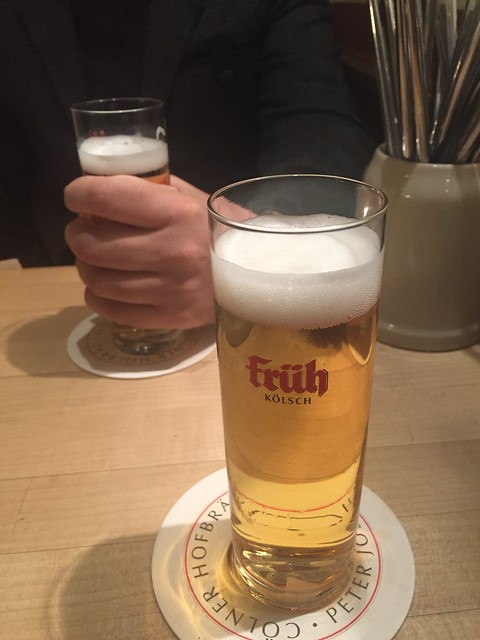 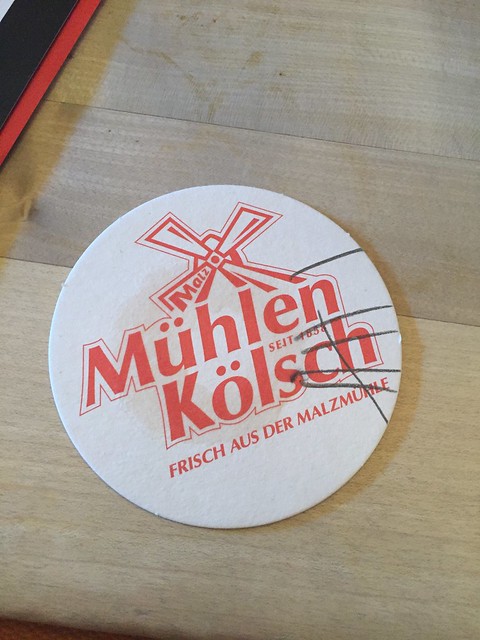 The other noticeable thing about Cologne is the diversity. The current migration situation happening in the world right now can be felt here. I don't say this to start a political conversation, but just to say it's noticeable. There are many people here that are clearly not native to Germany. Cologne took in 10,000 migrants in 2015 alone. Being here only for a few days doesn't give us the ability to comment on any of the situation, but it does bring a reminder of the daily struggle people are dealing with, something that's easy to put in the back of your mind living on an island in the Caribbean. It almost makes me embarrassed to tell people we've given up our comfortable home to pay to haul our luggage around the world for 4 months, when all some people want is a place to call home after fleeing the only place they've known with what they have on their backs. While I'm not sure embarrassed is the proper emotion, I know for sure I feel grateful.

Lest the elephant in the city be forgotten, Cologne's number one tourist attraction is its massive gothic Cathedral that was built starting in 1248 and took 600+ years to be completed. It survived the second world war while the rest of the city was destroyed. We weren't able to take a tour or climb the 500 steps to the top of the south tower as this weekend was a pilgrimage weekend. The bones of the Three Wise Men are reportedly entombed here and serve as a holy site for many Catholics. It's so big it's hard to get the whole building in a picture. 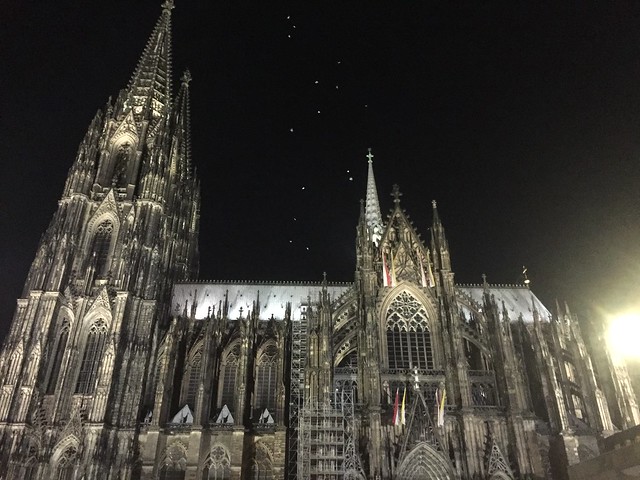 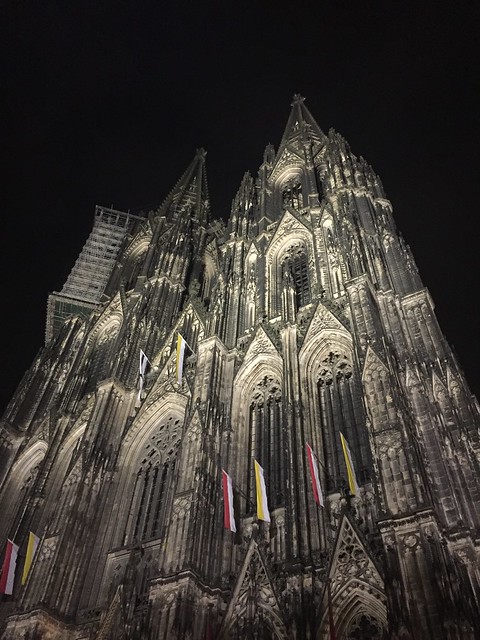 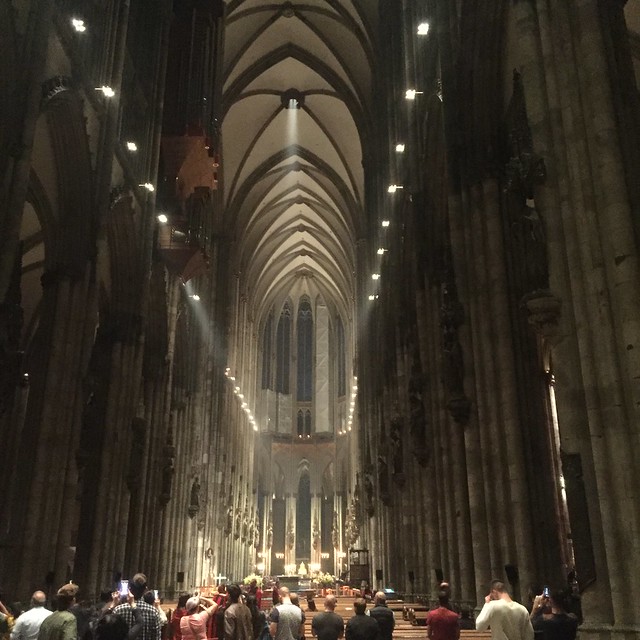 Other than flooding half of our Airbnb*, Cologne has been a refreshing visit to add to our German experiences. A low key city with plenty of museums, culture, beer, and swine - we could live here. 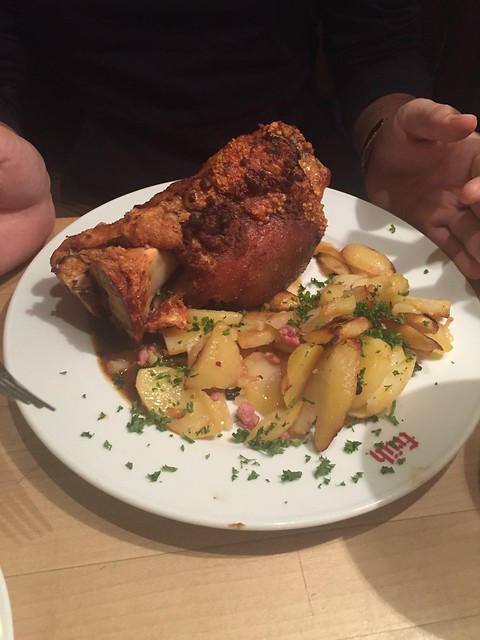 Thank you for this gem Germany. 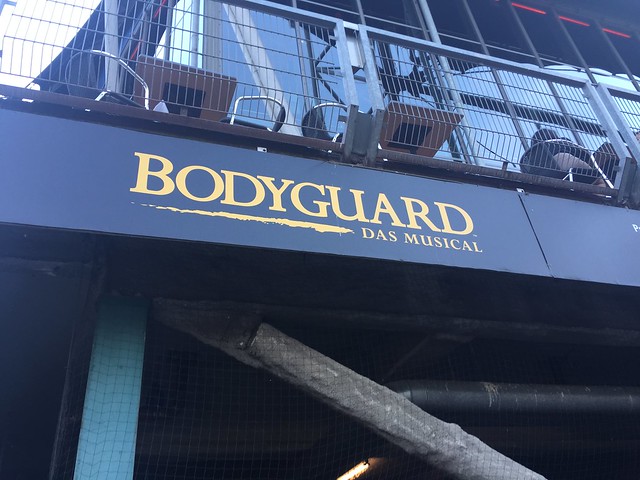 *Showers should have lips around them so you can tell if the drain is clogged...